If you’re in the right place sometimes the world will revolve around you. In 1987 that was certainly my impression of the Blake Building in downtown DC. Rising above the Farragut North Metro Station, 1025 Connecticut Ave and its environs offered a perpetual brush with history.

It was the year of Broadcast News and the lunchtime pavement teemed with those who delivered the news – rumpled newsman David Brinkley for instance – and those who made it, such as Robert Bork. Nominated to the Supreme Court in July, by summer’s end rejection seemed imminent – as confirmed by his sullen expression while waiting for a ride.

This was also the summer of the Iran-Contra Scandal and during a quick nosh at Duke Zeibert’s across the street (that chicken-in-a-pot special of theirs ruined two of my favorite ties) I saw Colonel Oliver North’s attorney, Brendan Sullivan (“I’m not a potted plant. I’m here as the lawyer”) genially seated by… a potted plant.

As for Ollie himself, he was much slighter without the medals and ribbons. We’d regularly share an elevator in the Blake Building, where his offices were a few floors above mine. But while I churned out trade magazine pieces on a Canon Typestar 110 (“the latest in typewriter development”) and dreamed of the day when my company would spring for a DOS word processor, he and his fellow defendants were up there examining classified government documents with “tempest tested” spy-proof computers.

From an historical perspective, perhaps the most thrilling episode was when Soviet Premier Michael Gorbachev’s motorcade screeched to a halt on its way to the White House, right outside my window, and a smiling “Gorby” stepped out of his boxy ZIL limousine to shake hands with the crowd. I caught that one on camera.

Still, from a personal perspective, nothing compares to a revelation about a colleague in the office.

As writer and editor, I rarely got a chance to mingle with those in advertising sales. Then one day we were forced to evacuate our building. Whether it had something to do with the goings-on upstairs or the Secret Service field office discreetly located across the street, someone called in a threat and there went the next few hours.

Dapper, in his early 70s, and with an indiscernible accent, word had it that Ilya was a retired biochemist who spoke seven languages and had taught at Oxford. Intrigued, I suggested a cup of coffee down the street. “Oh I taught there for years,” he said, “and I still maintain a healthy income from patents on my soybean fermentation process, but Winslow, it’s important to keep your mind active. That’s why I’m here.”

I mentioned that I’d lived in England myself. “There are still some things to attend to in London, so my girlfriend, Linda and I are going back for a visit. But first we’re going to spend a few days in Paris, and (shhhh) I’m going to ask her to marry me.”

“Of course you must propose in French.”

Since the one thing I can say in French is that I don’t speak it (Je ne parle pas Français) he grabbed a napkin and wrote out a little script, dropping by my office from time to time to see if I’d learned it by heart: Savez-vous pourquoi nous sommes ici? Je voudrais que tu sois ma femme (“Do you know why we’re here? I’d like you to be my wife.”).

It wasn’t quite how I’d have put it in English, but his was a more paternal generation and I didn’t have the wherewithal to soften it. I was therefore much relieved that producing a ring and phonetically reciting my script on the steps of Sacre Couer still resulted in a joyous, “Oui.” After we were married Linda and I moved to Toronto and I lost touch with Ilya.

Considering his age I wasn’t surprised to see that he’d died in 1995. What did surprise me however, was the astonishing number of Google listings his name brought up, starting with a 1949 issue of Life Magazine.

Entitled Mr. Lucky Has a Roman Holiday, there was an article about deported mobster, Lucky Luciano who shared a suite of rooms in one of Rome’s best hotels with a ballerina, Signora Igea Lissoni, and his “good friend Ilya, a onetime New York press agent” who was recuperating in bed after an auto crash … And there was Ilya, 40 years younger but eminently recognizable, being read to by the Godfather of Organized Crime. 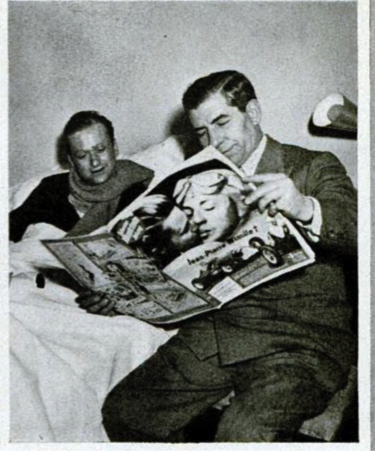 Then there were the other assorted listings, mostly newspaper clippings, and it was with an increasingly jaundiced (though fascinated) eye that I worked my way through them.

Taking it all at face value one was to surmise that Ilya was born in London to parents who held Russian passports but were of English descent. As a violin prodigy at age eight, he toured Europe in concerts conducted by Sir John Barbirolli, and went on to study Philosophy at the Sorbonne.

By the mid-1930s, he was assistant conductor at Teatro Alla Scala in Milan. Then he worked for a PR firm in New York, where he created a winning campaign for the Brazilian Coffee Import Bureau to convince Americans to drink more coffee.

In the decades that followed he was identified as a London-based music and stage director, the president of a major food processing company in Florida, an artist, a hotel/night club owner in Cozumel, a symphony composer, an Austin-based art promoter, a world-class chess tournament sponsor/organizer, a Washington-based auto dealer (in which he utilized his knowledge of Russian, Japanese, German, Italian, French, Spanish, and Portuguese to sell Volvos to foreign diplomats), an Oxford professor and biochemist… C’est la vie.

At a time when truth and honesty have become increasingly elastic concepts it’s not hard for your garden variety cynic to separate what Ilya said he was from what he surely was – mobster, bon vivant, hotel/night club owner, art maven, car salesman, linguist, confidence man. I knew him when he was in advertising sales.

Whoever he was, his was an interesting journey and naturally I’m reminded of this Dean Kay/ Kelly Gordon song, most famously sung by Sinatra, who’d chummed around with Lucky Luciano himself, back in the day.

That’s life (that’s life) that’s what people say
You’re riding high in April
Shot down in May
But I know I’m gonna change that tune
When I’m back on top, back on top in June

I said, that’s life (that’s life) and as funny as it may seem
Some people get their kicks
Stompin’ on a dream
But I don’t let it, let it get me down
‘Cause this fine old world it keeps spinnin’ around

I’ve been a puppet, a pauper, a pirate
A poet, a pawn and a king
I’ve been up and down and over and out
And I know one thing
Each time I find myself flat on my face
I pick myself up and get back in the race

That’s life (that’s life) I tell ya, I can’t deny it
I thought of quitting, baby
But my heart just ain’t gonna buy it
And if I didn’t think it was worth one single try
I’d jump right on a big bird and then I’d fly

I’ve been a puppet, a pauper, a pirate
A poet, a pawn and a king
I’ve been up and down and over and out
And I know one thing
Each time I find myself layin’ flat on my face
I just pick myself up and get back in the race

That’s life (that’s life) that’s life
And I can’t deny it
Many times I thought of cuttin’ out but my heart won’t buy it
But if there’s nothing shakin’ come here this July
I’m gonna roll myself up in a big ball and die
My, my