Wednesday, August 24,1988. I was sitting in my office on Connecticut Avenue when time began to pick up speed. It was 4:59 p.m. and the receptionist had just announced the  arrival of my ‘ol mates, Giles and Tony. “Why, they’re as cute as buttons,” said a passing co-worker.

Perhaps, but having arrived from England they were also ready for the weekend to begin, starting with some supper.  So off we went, to the Occidental Grill for “handcrafted” cocktails and swordfish club sandwiches, followed by a visit to the Hotel Washington’s roof bar for a few more rounds while the sun set over the White House.  The weekend had begun.

A hailed cab after dark, a quick visit to a liquor store in the National Press Building, and our next stop was Union Station where the Night Owl was ready to board. Overnight sleepers had been plying the rails between Washington and Boston since the days of the Federal Express in 1912, and Amtrak’s 1980s version was first rate, complete with showers, room service, and obliging porters who accepted the early vestiges of a wedding party.

Departing promptly at 10:30 p.m. with stops in Baltimore, Wilmington, and Philadelphia, the train took an hour layover in New York before wending its way along the coast to Stamford, New Haven, Providence and finally Boston. Replaced by the more “modular” Twilight Express in the ’90s, the marvelous old-school service was dropped altogether (along with the fanicful naming of train routes) with the advent of high-speed rail in the 2000s.

Ah, but that was years away.  On this night we had our own compartment, to play cards, drink scotch whisky and, while the Night Owl lumbered through the gloom, to raise a toast to each new state we entered. Although the actual number was eight, our glasses clinked over a dozen times just to make sure.

Since my bride-to-be was to meet us in Boston I wanted to be fresh.  But somehow we didn’t manage to turn-in until after the train had departed from New York’s Penn Station at 3:17 a.m, and when the Night Owl pulled in to South Station at 8:05 a.m. “fresh” was not one of the better ways to describe us. “We have an appointment with the minister,” Linda blithely reminded me, “and Sweety, the smell of booze is oozing through your pores.”

This was Thursday, and with early arrivals and last minute arrangements (not to mention a quick shower) the logistics were intense. This was also the date that my best man, Sterling, had selected for the bachelor party, thereby providing a buffer for the groom and some much-needed peace of mind for the mother of the bride … and the bride herself.  Held at Doyles in Jamaica Plain, with the elevated ‘T’ rumbling overhead and two-dozen types of beer rumbling through Doyles’ taps, the toasting began anew and carried on through the after-party at Sterling’s West Roxbury home,

Now it was Friday, and once the rumbling in my skull had subsided, things got really, really busy: there were more arrivals; and a rehearsal at the Concord church that Linda’s family has attended for over 50 years, followed by a rehearsal dinner at Indian Meadows in Westborough. Then, while Linda and her retinue returned to her parents’ home in Concord, me and mine – including assorted friends and mirth-making family members  – headed to my father’s place for what amounted to a pool party in Southborough.  27 years later, It’s a blur to me, but at some point I made it to bed.

And then it was Saturday, August 27, with each moment passing at hypersonic speed.  The memories come in snippets: of stepping out of a steamy morning shower and just wrapping on my towel before my sister and brother-in-law burst through the door for a finger-twirling rendition of Going to the Chapel; and of my father’s expressed concern that wearing morning attire for a 4:00 p.m. wedding was surely pushing the limits of propriety; and of the arrival of my old pal, McGill in his parent’s new station wagon; and a telegram delivered by Western Union from Terry, a far-off friend; and the arrival of my groomsman and cousin, Bradley, who wondered where my best man was (so did I!); and at long last, the arrival of Sterling, who’d had car trouble; … and then, just in from London, here was Claude wearing a morning suit and a top hat.

The world was in a spin but somehow everyone made it to Concord (Claude, who rode with McGill was very impressed with this ‘station wagon’), and as if in a dream I found myself at the alter facing a sanctuary packed with some of the finest people on earth, each looking my way and smiling…

…Until the first notes of Thine is the Glory came thundering over the ancient pipe organ – set to a popular Handel tune, a choir had sung this hymn when I proposed to Linda on the steps of Sacré-Cœur – and thine WAS the glory when all the air was sucked from the room in a single gasp while my stunningly beautiful bride came striding down the aisle in her father’s arm. The spree that led to it may have been epic but nothing in my life has ever compared to this! 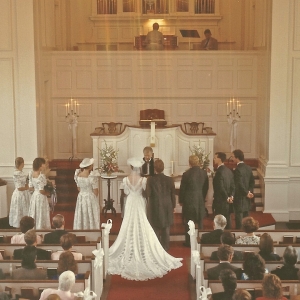 Although we wrote our own vows I have scant recollection as to what transpired between “dearly beloved,” and “you may kiss the bride.”  As for the kiss itself?  That was unforgettable. Now we were one, and it was as if time – which would soon return to joyous hyperspeed at the reception – had settled into a comfortable pace, because all was well,  very well, for Mr. & Mrs. P.

It’s a sentiment that’s reflected by this song. Written by Noel Paul Stookey who served as best man at (his Peter, Paul and Mary bandmate) Peter Yarrow’s wedding. Yarrow, who was raised in the liberal Jewish tradition was marrying  (Eugene McCarthy’s niece) Marybeth McCarthy, a Catholic, and he asked Stookey, who had recently become born again to “bless our wedding with a song.”  After praying about it, Stookey is said to have ‘received’ the lyrics and melody in response.

With New and Old Testament references, specifically Matthew 18:20 (“For whenever two or more of you are gathered…”) and Genesis 2:24 (“A man shall leave his mother and a woman leave her home.”), Stookey duly performed the song at the couple’s Minnesota wedding with no intention of releasing it commercially. But the newlyweds convinced him to change his mind and this version of Wedding Song, with Stookey singing and playing a 12 string guitar, was featured on his first solo album, “Paul and…” in 1971.

Unwilling to take credit for what he saw as a divine gift, Stookey insisted that authorship should not be provided on the record or sheet music. Instead the copyright was (and is) held by the Public Domain Foundation, which he established to receive the songwriting and publishing royalties and distribute them to various charities.

“Into every songwriter’s life comes a song,”  Stookey later wrote, “the source of which cannot be explained by personal experience.”

Rest assured this troubadour is acting on His part

The union of your spirits, here, has caused Him to remain

Woman draws her life from man and gives it back again

And there is Love, there is love

Well then what’s to be the reason for becoming man and wife?

And if loving is the answer then who’s the giving for?

Do you believe in something that you’ve never seen before?

Oh there’s love, there is love

Oh, the marriage of your spirits here has caused Him to remain

1 thought on “Do you believe in something that you’ve never seen before?”