What’s the best selling album in U.S. history?  Apparently it’s a tie, with both records having sold more than 29 million copies domestically. You probably guessed Michael Jackson’s “Thriller” …but how about “Eagles Greatest Hits (1971-1975)”?

Okay how about this, which of these acts can still put on an absolutely riveting show, best seen in the middle of the summer when you and your friends are at your loosest, even though (or perhaps because) its band members (some original, some later replacements) are all in their mid-60s?

In 1971 Linda Ronstadt recruited session musicians Glenn Frey and Don Henley for a summer tour and later asked musicians Randy Meisner and Bernie Leadon to join them for a concert at Disneyland.  The four man unit next played on Ronstadt’s eponymous (third) studio album and soon decided to form their own band. A record deal quickly followed.

It was Frey (rhymes with “fry”) who chose to name the group and as he had once referred to himself as the “Teen King” in light of his success with the ladies, he actually considered “Teen King and the Emergencies” (other potential names were “The Saltines” and “The Small Frey Dance Band”) before settling on a little tribute to another legendary Southern California band, The Byrds.  However, Frey was famously adamant that the name should be “Eagles” (as opposed to “The Eagles”), which was also to be the name of their highly successful 1972 debut album.

Next came a concept album based on Old West outlaws and how their lifestyles compared (implicitly) to those of contemporary rock stars.  Although not a hit upon its release in 1973, the record came to be recognized as a creative masterpiece and is now considered to be one of the greatest country rock albums of all time. It came with some seriously interesting cover photography. Here’s the beginning of a 1973 “Rolling Stone” Magazine” review:

“If they gave a Grammy for the best interior gatefold cover, this one should be nominated. It is the best since For The Roses, but for hardly the same reason. There they are, the four Eagles and their outlaw compatriots Jackson Browne and John David Souther, tied up on the ground at the mercy of their lawmen roadies, producer Glyn Johns and a couple of deputized friends. The photo is an alleged reenactment of the capture of the Dalton gang in the late 19th century. After shooting this picture, the outside cover and the billboards for Sunset Boulevard, the group dusted themselves off and flew to London to record Desperado, the chronicle of the rise and fall of the Doolin-Dalton renegades….” 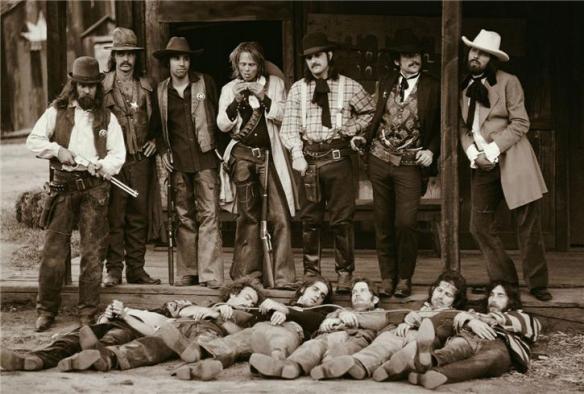 Although it was never released as a single, today’s selection from the album (written by Henley and Frey) has long been an Eagles’ signature song and is generally their way of capping off an evening’s concert, sometimes sung by Henley, who sang it originally, sometimes by Frey.  Are we feeling nostalgic yet?

Desperado, why don’t you come to your senses?

You been out ridin’ fences for so long now

Oh, you’re a hard one

I know that you got your reasons

These things that are pleasin’ you

Can hurt you somehow

Don’t you draw the Queen of Diamonds, boy

She’ll beat you if she’s able

You know the Queen of Hearts is always your best bet

Now it seems to me, some fine things

Have been laid upon your table

But you only want the ones that you can’t get

Your pain and your hunger, they’re drivin’ you home

Your prison is walking through this world all alone

Don’t your feet get cold in the wintertime?

The sky won’t snow and the sun won’t shine

It’s hard to tell the nighttime from the day

You’re losin’ all your highs and lows

Ain’t it funny how the feeling goes away?

Desperado, why don’t you come to your senses?

Come down from your fences, open the gate

It may be rainin’, but there’s a rainbow above you

You better let somebody love you, before it’s too late