“Short, sharp shock.” I always assumed the term was coined by British Home Secretary, Willie Whitelaw who, as part of the Thatcher government, used it to describe the quick, severe punishment meted out to young offenders in hopes of scaring them straight.  But as any attentive Gilbert and Sullivan enthusiast will tell you, it stems back at least as far as The Mikado:

To sit in solemn silence in a dull, dark dock,

In a pestilential prison with a life-long lock

Awaiting the sensation of a short, sharp shock

From a cheap and chippy chopper on a big, black block

Painful, but quick. Fast forward a century to a 22 year-old singer/songwriter from Dallas, Texas named Michelle Karen Johnston, who decided to change her stage name right after the 1984 Democratic National Convention in San Francisco, where she was forcibly arrested (in a big way) for protesting against major corporations that contribute money to both Democratic and Republican campaigns.

Thereafter known as Michelle Shocked (a contraction of “Miss Shell Shocked”), she later explained that the name refers to the thousand-yard stare symptomatic of shell-shock victims (as they once called those suffering from battle fatigue before it was known as PTSD).  “These people from outward appearances had survived the war quite well,” said Shocked, “when in fact their minds were blown.”

Michelle Shocked first gained popularity in Britain with her 1986 debut album The Texas Campfire Tapes, which perhaps is where she derived the name for her second album in 1988, Short Sharp Shocked.  Today’s pleasantly diverting, slightly incongruous selection is a featured track.

The album cover (which was later closely cropped on re-issue) features a photo taken of the 22 year old Michelle Karen Johnston during the 1984 Democratic National Convention. Explanation, perhaps, for what could possibly compel one to ever come up with such a peculiar new appellation as a performer. 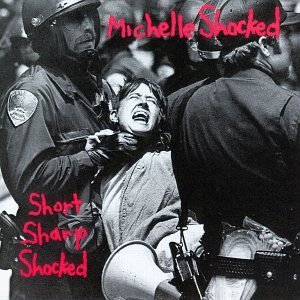 I took time out to write to my old friend

I walked across that burning bridge

Mailed my letter off to Dallas

But her reply came from Anchorage, Alaska

It’s been over two years you know, my old friend

Take me back to the days of the foreign telegrams

And the all-night rock and rollin’… hey Shell

We was wild then

When you’re anchored down in Anchorage

Hey Girl, I think the last time I saw you

Was on me and Leroy’s wedding day

What was the name of that love song they played?

I forgot how it goes

I don’t recall how it goes

Anchored down in Anchorage

Leroy got a better job so we moved

I got a brand new eight month old baby girl

Hey Girl, what’s it like to be in New York?

Tell me, what’s it like to be a skateboard punk rocker?

When you’re anchored down in Anchorage

Anchored down in Anchorage